My journey to Weymouth started on Friday September 21st, bright sunshine but very windy following the storms across the country. After registration, a recce ride proved what a challenge the weekend was likely to become. Race briefing was generally upbeat, although caution regarding the weekend weather. Later a fish n chip supper with most of my team mates that evening and a beer to calm any nerves. My advise to everyone was to stay warm. Saturday was horrible, slate grey sky, windy and pouring with rain, let’s be honest Weymouth did not look very inviting.

I racked in the early afternoon, with T1 already turning into a swimming pool. I did my first full IronMan in Weymouth 2016, so was familiar with the layout of the event and the course. To kill some time I decided to drive along the Jurassic coast and explore. Parked up at Lulworth Cove and endured a cliff top walk to Durdle Door in horizontal rain. Soaked, I sought refuge in a little cafe on Lulworth Cove and ordered cream tea. After awhile realised that people in the cafe were looking at me and my legs in particular, I knew I looked like a drowned rat, but so did everyone else. This is a bit rude, I thought, but then I realised they were staring at my left ankle, where I had place my IM timing chip. People must have thought that the chip was an ankle monitor and I was out on parole, very funny!

Sunday, race morning, up as usual at stupid o’clock, nutrition done, left my hotel at 05.30. Walked along the Esplanade, wind was calm, a little rain in the air, sea looked okay. Kids were still hanging out outside a nightclub.

Into the buzz of everyone arriving at transition. About 06.30, announcements came through that the swim had been shorten to 950m (more like 1150m). The wind had changed and the sea began to chop, you could see a weather front advancing from the sea. The race was relayed by about 40 minutes, which by this time most athletes were in the starting area in bare feet and beginning to feel the cold.

As we waited for the off, the chattering of teeth and the slapping of wetsuits to keep warm was the rhythmic sound. Into the sea, nice and warm, sea temperature around 16 degrees, air temperature 7/8 degrees! The swim to the first buoy out to sea was horrible, the choppy water meant whichever way you turned, you got a face full of water, breathing was hard, the wind was against. Turning towards home was much easier.

Into T1, I put on full wet weather gear, overshoes, gloves etc (so pleased I did!). Running to my Giant TT bike, having to dodge ankle deep puddles onto the bike course. The rain now was torrential, out into the course roads were flooded and you were forced to ride along the centre of the road where their was a bit camber. Around 50% of the field were doing their first 70.3 and I felt sorry for anyone that did not dress appropriately for the bike, it was so cold and wet. Athletes only wearing trisuits were turning blue.

Into the bike course it became apparent a lot of riders including pros were in trouble with hypothermia, locals bringing out tea and blankets and the sweep vans full of people with silver blankets. The volunteers and locals were amazing, the aid stations particularly the first was like a war zone.

Sweeping into Weymouth at the end of the ride was a major relief.

Quick change in T2 and would you believe sunshine, crowds and smiling faces. It was the best feeling running past HTC super supporters corner, who were making the most noise and gave me and all competitors such a lift, thank you!!

A great achievement for HTC

Down the finish, finish time a shade under 6 hours and 3rd in age group, get in!!

All HTC athletes finished, some for their first IronMan 70.3, a monumental achievement especially given the conditions, even the organisers acknowledged how hard a race that was, very proud of everyone! Super pleased to be invited onto the podium at the awards ceremony later in the afternoon and receive my trophy.

A race to remember where the result was HTC 1 – Elements 0!!

Richard
P.s. Weymouth council, after giving you so much, please can you cancel my parking ticket!?

Diego – I could not find overshoes, so improvised by using waterproof bags between my feet and shoes. The bags could not be sealed properly so filled with water by mile 2. Toes completely numb by T2! To make matters worse a pair of triathlon shoelaces (plastic pieces included) had found their way into one of my trainers. I did not notice them in transition because my toes were still numb, only realising my mistake after crossing the finish line!

Laurent – I decided to run my first 70.3 on a special day….my 35th birthday! Alex and Diego asked me the night before if I remembered what I did for the 34th candle….what is sure is that I will remember this one for a long long time! Arriving in the cold at 5am….luckily meeting Diego around the start line, and chatting for 1 hour of any topic but what will happen to us…..being “almost” happy to get in the water as it was 10 degrees warmer than the air temperature….starting the bike and wondering what I am doing here after 10km as I was totally soaked, looking at so many athletes in hypothermia, repairing punctures,….Weather get better….well…it stopped raining after 35km, I started to dry, gaining confidence in my cycling, and that I could do it. Run was tough obviously, especially the last 8-9kms, but starting the half-marathon with such a beautiful, (unexpected) sunshine and that amazing crowd gave a lot of confidence to finish the race!

The whole day, when cold and pain were there, I had this picture of the finisher’s medal which had a Dinosaur on it…I thought of my 18 months daughter, who loves doing the roaring of the Dinosaur…and that there would be absolutely no way to give it up now and not to give her this medal as a present after the finish line…. 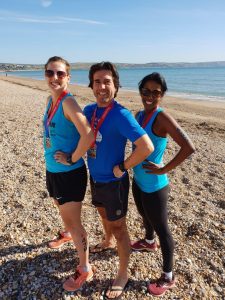 Tashia – I signed up for Weymouth 6weeks before the race on one of those sweltering hot summer days when racing along the Jurassic coast with the sun on our faces sounded rather magical. The race was nothing like I imagined. The weather was abysmal, torrential rain and wind. I have never been so cold and wet in my life. Somehow I managed to survive.  I didn’t drown. No punctures. I wanted to quit so many times but the enthusiasm of our cheering squad was incredible, they got me through, and also the fact that I already visited the gift shop and bought all the bling!
To cut a long story short, I was SO happy to finish that race and I learnt a valuable lesson: I will NEVER race in the UK or visit Weymouth again!
Dan (super supporter) – My race report is fairly short. I woke up at 4 30am to be cold and wet for the next 8 hours. I will never return to Weymouth 🤣 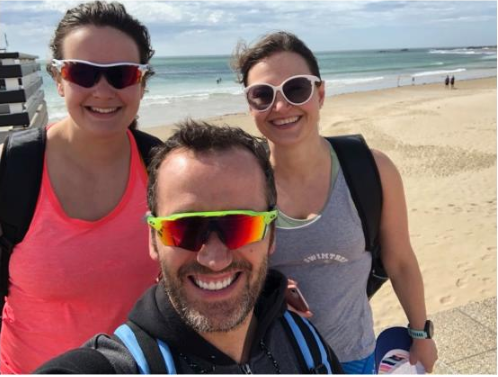 First things first, Thank you my awesome HTC cheer squad and friends and colleagues at TJX at for all the support, every […] 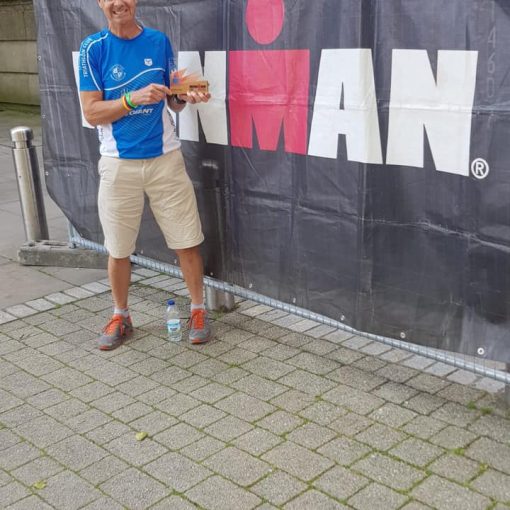 By: Richard Miller Pain is inevitable, suffering is optional! (Murakami)Ordinary people, extraordinary goals. (Me) Daniel mentioned earlier in the year he was […] 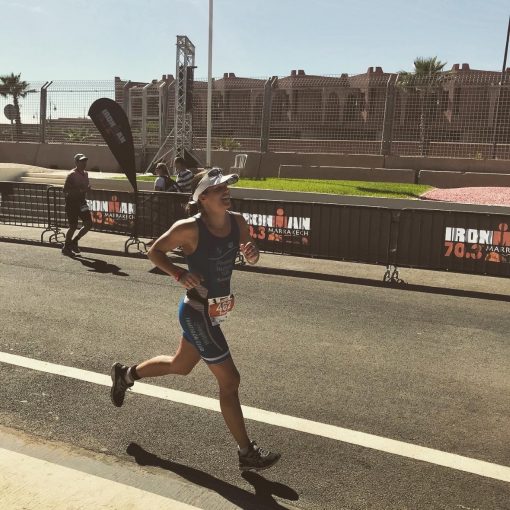 December has arrived and many of us are planning our goals for the new year. For Sophie, 2019 was a different year, […]